Google’s driverless car has been burning up news and social media outlets, portraying a futuristic world where cars drive themselves. Rapid development in this area excites some; frightens others.

What’s for certain is that some form of driverless technology will make its way to more and more vehicle models in the not too distant future.

A key piece of driverless car technology is collision avoidance. It serves to not only lessen the impact of a crash, but to ideally prevent it. “For the past 40 years, we’ve been working on protecting people from the crash,” says David Strickland, NHTSA’s former administrator. “This is the new North Star, making sure the crash never happens.”1

For dealership parts departments and body shops this begs the question; will driverless technology spell the end of the collision repair business that today employs nearly 700,000 in the U.S. alone? And what about the sizeable revenue streams OE’s recognize in repair parts revenue?

Not so fast. As the old adage goes: if it sounds too good to be true, it probably is.

Collision Repair Facilities Will Evolve, Too

Industry analysts project that collision avoidance technology will ultimately decrease automotive collision by 30%2. When driverless vehicle do eventually engage in a crash, new and potentially more complex collision repairs will be required. As this technology matures, items such as sensors, cameras, and restraints may become standard repairs for Body Shops or replacement items at scheduled service intervals.

Looking to boost the profitability and efficiency of your parts business?

For more information head to: www.autopartsbridge.com 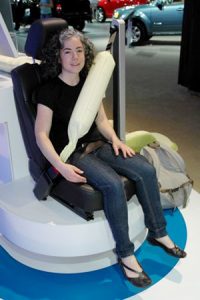 After seat belts, the cornerstone of collision avoidance is backup cameras, which have been used for over 2 decades.

Once only a feature of futuristic concept and luxury models, backup cameras will soon be in every car to alleviate the famous blind spot many drivers experience. In March 2014, the National Highway Traffic Safety Administration announced that it would require all new automobiles to have backup cameras by 2018.3

Manufacturers are going one step further, lobbying for backup cameras to replace outside mirrors. This will have the added benefit of reducing drag and improving fuel economy. However, electronic cameras and sensors require the driver to maintain a clean lens and unobstructed view.

Another safety feature gaining in popularity is the rear inflatable seat belt. In 2011, European manufacturers equipped the new Ford Mondeo with inflatable rear seat belts. In 2014, these seat belts were also installed in certain U.S. Ford and Lincoln models – Flex, Explorer, Fusion, Taurus, MKT and MKZ. While not preventing a collision, this technology will inflate the rear seat belt within 40 milliseconds of sensing a collision. Studies have shown this provides rear seat passengers a 5x larger protection area than a standard belt. This upgrade was designed to further protect against head, neck, and chest injuries.

While technology continues to close the gap between full driverless automation and human responsibility, for now an active, aware driver is still the keystone to a safe driving experience. Fully automated vehicles that operate without a driver are still considered a decade away. Driverless car reliability, security, and potential liability issues, are a just a few barriers that will need to be overcome before widespread market adoption.