Currently named Detroit Arsenal (DTA), the former Detroit Arsenal Tank Plant (DATP) was the first manufacturing plant ever built for the mass production of tanks in the United States. Established in 1940 under Chrysler, this plant was owned by the U.S. government until 1996. It was designed by architect Albert Kahn. The building was designed originally as a dual production facility, so that it could make armaments and be turned into peaceful production at war’s end. [1] Notwithstanding its name, the 113-acre (0.46 km2) site was located in Warren, Michigan, Detroit’s largest suburb [2]. 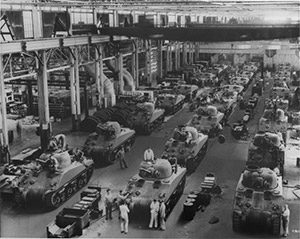 Chrysler’s construction effort at the plant in 1941 was one of the fastest on record. During World War II, the Detroit Arsenal Tank Plant built a quarter of the 89,568 total tanks produced in the U.S. overall. The U.S. involvement in the Korean War boosted production for the first time since World War II had ended In May 1952, Chrysler resumed control of the plant from the U.S. Army, which had been unable to ramp up production.

As a Government-Owned, Contractor Operated (GOCO) facility, Chrysler retained operational control of the production facility until March 1982, when Chrysler sold its Chrysler Defense division to General Dynamics Land Systems. General Dynamics produced the M1 Abrams tank at the facility (and at another plant in Lima, Ohio) until 1996, when the plant was closed and tank assembly and maintenance operations were consolidated at the Lima plant. The plant and some of the adjoining property were transferred to the City of Warren in 2001. The site of the original tank plant has been parcelled up and is now dedicated to civilian uses. All that is left of the “Arsenal of Democracy” is a State of Michigan Historical Marker.

The structure of the plant was designed to survive bombardment by the weapons of the day. It included 3-foot-thick (0.91 m) concrete walls in some areas and a reinforced roof with slats to direct bombs away from vulnerable windows and exhaust fans.

The portion of the property not sold to the city remains an active Army facility with many agencies present. The installation is managed by Installation Management Command (IMCOM) and hosts the headquarters of the United States Army Tank Automotive Research, Development and Engineering Center (TARDEC) and the United States Army TACOM Life Cycle Management Command. TACOM continues to function at the location, is in fact in a major building boom as of 2010.