Fancy owning a Ferrari but can’t quite come up the funds? Now your chance has arrived at a significantly cheaper price, even if it’s a less exhilarating ride! 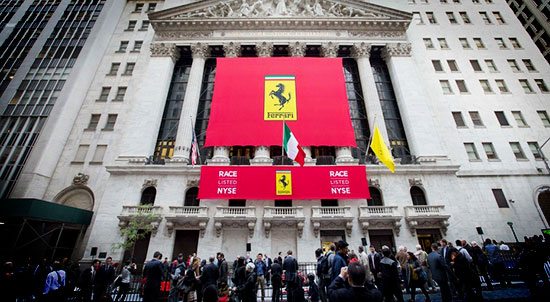 In October, Fiat Chrysler Automobiles (FCA) completed the high profile listing of Ferrari on the New York Stock Exchange (NYSE). The move to list arguably the world’s most famous and revered automaker comes as FCA diverts more resources to the ongoing global expansion of its Maserati and Jeep brands, and embarks on a new model blitz for its fabled Alfa Romeo brand to help it better compete with heavyweight competitors BMW, Audi and Mercedes-Benz.

Only 10% of Ferrari was made available in the IPO. Another 80% of Ferrari will eventually be distributed to existing FCA shareholders including the Agnelli family, founders of Fiat and majority owners of FCA. The other 10% of Ferrari is currently owned by Piero Ferrari, son of company founder Enzo. A loyalty voting scheme and pact between the Agnelli family and Piero Ferrari will see them effectively retain majority control of the automaker and deter unwanted takeover suitors. 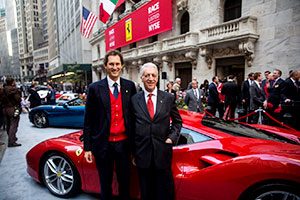 John Elkann (left) and Piero Ferrari, son of founder Enzo. A share loyalty voting scheme and pact will see them effectively have control of the automaker.

Throughout its presentations to investors, FCA and Ferrari management pitched the company as a global luxury brand similar to apparel and accessory giants such as Prada and Hermes, as opposed to a traditional automaker. These world-famous designer brands have historically been valued higher on stock markets than automakers. “Ferrari is capable of being a fully-fledged luxury brand,” said FCA CEO Sergio Marchionne earlier this year. “As such, it would occupy a space in the luxury goods sector, which shares its name with Ferrari and maintains the same level of attachment to exclusivity.” Trading under the ticker ‘RACE’, the launch was met enthusiastically and climbed 6% in its first day of trading, but has since cooled.

The IPO has not been met with universal delight however. Some ardent Ferrari tifosi have voiced their displeasure and fear for the company’s future. They believe that public ownership would see the automaker’s management attempt to appease shareholders and chase additional sales volume through non-traditional sports models such as SUVs and sedans. Others think that obvious profitability gains could be achieved by reducing investment in Formula 1, to the detriment of the brand’s racing image

Understandably Marchionne has sought to allay fears and reassure current owners and fans, insisting that it’s business as usual and nothing will change with the listing: “What is at the heart of the brand is this intimate relationship between us and the customer base,” he said. “Therefore it would be almost suicidal to try to expand volumes to the detriment of that relationship.”

In the filing to the NYSE, Ferrari said the number of people able to afford its vehicles is growing, particularly in emerging markets where the automaker previously had a minimal sales presence. This would allow the company to comfortably expand sales volume by nearly 30% to 9,000 vehicles in 2019, without impacting on brand equity and its unmatched residual values in established markets.

Not only will profits from the sale of Ferrari be used in part to fund a new range of Alfa Romeo models, the company’s renowned engineering expertise will see it develop high-output V6 engines to be used in these models. To signify the close working and marketing ties between the two companies, an updated Alfa Romeo logo has adorned the flank of Ferrari’s Formula 1 cars this season.

However the relationship between the two automakers goes further back. In 1929, Enzo Ferrari founded the Scuderia Ferrari as an Alfa Romeo racing team, before going independent in 1939. To differentiate his cars from other teams, in 1932 he began painting them with a large crest featuring a prancing horse on a yellow background. The rest as they say, is history!