Is this race suit the future of motorsport?

The development of wearable technology that could impact the automotive industry is gathering pace. Earlier this year we looked at the immense potential for ‘connected’ wearables in the Service Department, to improve productivity.

Now two of Germany’s biggest and most famous organisations have collaborated on a ground-breaking motorsport apparel prototype that may one day make it to a racing circuit near you.

As part of the unveiling of BMW’s latest concept vehicle, the CSL 3.0 Hommage R, the automaker has teamed up with sports apparel maker PUMA to create a next-generation race suit with cutting-edge ‘connected’ capabilities.

PUMA’s race suit was created especially for integration to the cabin of the CSL 3.0 Hommage R.

The race suit combines the very best of PUMA’s apparel and shoe technologies with the vehicle’s Bluetooth system and on-board diagnostics, to improve connection between the car, race suit and driver’s helmet. The end result is that the critical information the driver requires for better lap times and performance, such as speed, RPM, gear selection, the racing line around the track and the perfect breaking points, is displayed on the helmet visor.

According to BMW, the information transmitted to the helmet visor can be customized based on individual driver needs. When the driver’s racing gloves are in contact with the steering wheel, illuminated piping integrated into the sleeves of the suit, show the transfer of race data from vehicle to driver. 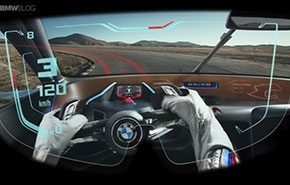 Critical driver information such as km/h, gear, RPM, racing line and break points can be displayed on the driver’s helmet.

PUMA’s Global Creative Director Torsten Hochstetter, says his organisation is using this prototype to develop future apparel integration with racing vehicles. “We are constantly striving to innovate and develop new performance technologies and this project with BMW is a great example of what can be achieved,” Hochstetter said. “The CSL 3.0 Hommage R Concept Driver outfit project allowed us to explore innovations that will bring key benefits in the future. The notion of a concept car was translated to the driver outfit and allowed our innovation team to explore the limits of what can be achieved. We are working on developing the performance innovations for integration into future motorsport performance products.”

However in a sport where tenths of a second are often the difference between the spoils of victory and missing out on a podium finish, the development of motorsport wearables for professional race drivers and weekend car club warriors will continue in the future.

Are you a motorsport enthusiast that’s excited for the potential of wearables? What racing information would you like to see connected wearables communicate from car to driver? Email your thoughts to marketing@infomedia.com.au