Parts IS Parts: The multiple talents of the dealership parts guru

Walk into any of the popular auto parts chains today and ask for a set of AWSF-52 spark plugs. If you can get anyone’s attention, I guarantee that 9 out of 10 will ask, “What kind of car are they for?”

You think to yourself: “Who cares? Didn’t I just give them the part number?”

Chances are that this ‘Johnny Come Lately’ to the auto parts business will hardly know the difference between a Straight 6 and a V6; let alone whether or not you can use a FL300 in place of an FL1A.

And, when you try to return the part they sold you that didn’t fit, it’s always somehow your fault. “It’s the right one according to the catalog; you must not have an ‘05.”

Does he really think you don’t know the model year of your own car?

They have no idea, nor do they care, that the customer spent four hours on his back, under his car in the driveway, trying to make the wrong part fit. The only response the customer gets is: “I don’t know what to tell you, it’s supposed to be the right one.” And of course: “Sorry, no return on electrical parts.”

That begs the question: How much does an experienced, knowledgeable Parts Counter person mean to a dealership? Lots!!

Dealership Technicians, Service Advisors, Dealer Principals and yes, even customers, would quickly develop a deep appreciation for the old time Parts Guru if they had to deal with these “Chain Store Charlies” all day.

Dealership parts pros not only know what that ‘doo-hickey’ is, they know that there is an early and late version. They know that the late version is used after 7/7/10 and has two options that can be identified by the red or yellow stripe on the lower left backside of the part.

A good Parts pro knows that the part you are looking for has been replaced seven times and that he has one of the older numbers that he can sell you that will fit – and you won’t have to wait for the newest part, which, of course, is on backorder.

The old time Parts Guru knows you by name, will drop a part off to you on his way home, or leave the part you desperately need on his back porch so you can pick it up at 10pm that night when you are on your way home.

He’ll let you take two or three of the options out to your car in the parking lot and make sure one of them fits. He’ll make copies of wiring or vacuum diagrams or print the catalog illustration page so you can see exactly where the part you just bought is supposed to be installed.

The old time Parts Guru can pro-rate a battery without using an Excel spreadsheet. He knows that the part you need is in the 150 line, 300 piece stock order that is being checked in.

He can handle three phone lines, a counter full of customers, and file a transportation damage claim for the scratches on the imported Italian lawn furniture the boss’s wife had delivered to the dealership.

The old time Parts Guru cares that a customer is broken down and needs to leave tomorrow for that family vacation they planned for the past year. Maybe that’s why he drove across town on his lunch hour to ‘borrow’ the part that family needed from a buddy of his.

The old time Parts Guru is usually a little rough around the edges and can be a little “gruff,” even cynical. This usually comes from years of preaching from factory reps telling him he isn’t doing it the right way; that he has to change with the times.

The way everyone blames the Parts Department for backorders and bad parts makes you think they somehow believe that we make the stuff at home in our basements. They probably think we also package the stuff as every time something is boxed wrong, we get those raised eyebrows. Oh yeah, I almost forgot, they must also think we own the trucking company because every time a shipment is late it’s our fault.

Some call the old time Parts Guru a dinosaur. But, who do the young ‘whippersnappers’ run to whenever they can’t find something in those fancy computers? I still remember the look of terror on the face of one of our young guys when a customer wanted points and a condenser for a Mustang he was restoring. “Sorry,” he told the customer, “you will have to wait until Joe gets back from lunch.” 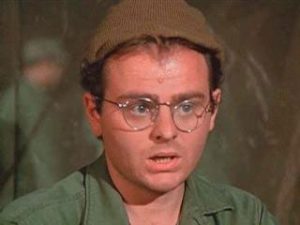 I have often compared the old time Parts Guru to Radar O’Riley on the M*A*S*H* TV. series. Every time they were out of something it was Radar’s fault. Every time they needed something, they ran to Radar. Every time something went wrong they blamed it on Radar. But let Radar get sick or go on leave and the place came to a standstill. Even though deep down they all loved and respected him, they didn’t often show it.

Is the old time Parts Guru a dying breed? Many believe so, but there are a lot of young guys out there who are getting closer and closer to earning the title. Who knows, 20 years from now, some young kid working the lunch hour might have that same terrified look when a customer is restoring his 1990 Town Car asks for a 12A650.