Presidential Sacrifices – they cut deeper than you think

Years later, while serving as the Governor of Arkansas, Bill Clinton acquired the Clearwater Aqua Mustang with a white rag top and white interior. After taking ownership, Clinton had the car refurbished and was often spotted cruising from Little Rock to Hot Springs, then back again. In fact, on Sundays he would often take his family out for a cruise in the convertible. 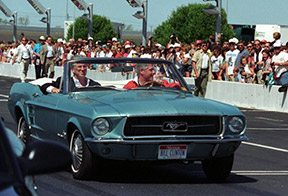 As is widely known, U.S. Presidents are not allowed to drive themselves around. As such, Clinton had to leave his Mustang back in Arkansas after being elected as the 42nd President of the United States. According to reports, Clinton has been quoted as saying that his 1967 Mustang was the hardest thing for him to leave behind when he moved into the White House.

That’s not to say he didn’t get behind the wheel of the car at all during his two terms as President. On April 17, 1994, Clinton was allowed to drive his Mustang 250 yards at the Charlotte Motor Speedway. Clinton, along with many other Mustang enthusiasts, attended the event at the track to celebrate the Ford Mustang’s 30th Anniversary; and he did so in style.

President Bill Clinton’s 1967 Mustang convertible is now on display at The Museum of Automobiles located in Morrilton, Ark. The car features a 120 hp 200-cubic inch I-6 engine and is matched with an automatic transmission. Although many reports state the car is “ice blue”, “blue flake”, or even “hornet green” in color, the car sports a Code “W” – Clearwater Aqua.

Ironically, the “Leader of the Free World” must deny himself the privacy in every day activities that we “regular folk” take for granted. The Chief does not have the luxury of dining in public, visiting friends and family, or even walking the dog without being shadowed by full security detail. These restrictions are difficult to comprehend. But one of the greatest sacrifices a president must make is to hang up the keys to a treasured vehicle.

So the next time you daydream about being President, remember that you must exchange your favorite ride for the seat of power.