Next time you watch the big game, take a timeout from the action and you’re bound to spot automaker logos on jerseys, signage and even special segments during the television broadcast.

Every year, many automakers choose to allocate a major part of their marketing spend to sponsor sports clubs, leagues, stadia and the world’s best athletes.

As one of the few universal languages spoken across the globe, automakers see sport as the ultimate marketing platform; with the power to unite people of all ages, demographics and cultures, connect and engage at an emotional level and stimulate endless interest and discussion. With billions of people worldwide tuning in to sporting events, aligning automaker brands with sporting institutions such as Manchester United and the Los Angeles Lakers, or once-in-a-generation talents such as Lionel Messi, Usain Bolt or LeBron James, can deliver instant brand awareness and a boost to image.

The concept of sports sponsorships and partnerships is not new. Ford Australia’s sponsorship of Australian Rules football club, Geelong Cats, is considered the longest continuous sports sponsorship in world sport at over 88 years. With Ford’s manufacturing plant and engineering teams based in the city of Geelong, many of the club’s players have also held positions with the automaker.

In some cases, relationships between automakers and sporting clubs go much deeper than simply placing a logo on a jersey. For over 90 years the Agnelli family of Turin, founders of Italian automaker Fiat, have been majority owners of Juventus F.C. Throughout the years, sustained success and investments in world-class players have had a halo effect on the family’s auto business. Star players have also been used as brand and vehicle ambassadors across the globe. Currently, Fiat Chrysler’s Jeep division has a $20 million a year shirt sponsorship deal with the club.

German soccer club VfL Wolfsburg originally developed out of a multi-sports club for Volkswagen workers. Nowadays the club is a wholly owned subsidiary of the Volkswagen Group and heavy investment has delivered on-field success. Expensive player and coaching acquisitions are deemed gifts to the Volkswagen’s 60,000 employees that work at the local plants during the week and support the team on the weekend1. Volkswagen also holds naming rights for the club’s stadium. 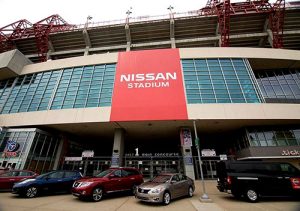 Nissan Stadium in Nashville, home of the NFL franchise the Tennessee Titans

Automakers now spend over $1.2 billion per annum on sports sponsorships (excluding motorsport categories such as Formula 1, MotoGP and NASCAR). Overall, General Motors leads spending at $235 million, followed by Toyota at $207 million, Hyundai and then Volkswagen1.

Future sponsorship opportunities in the US

– with the impact to be felt around the world

As sporting clubs and leagues seek the last remaining ways to increase revenue, more sponsorship and partnership opportunities are expected to be available in coming years. Excluding apparel suppliers, teams from the ‘Big 4’ North American professional sports leagues do not feature major jersey sponsorships. This has forced automakers to seek other options such as stadium naming rights. However the North American league with the biggest global reach and popularity, the National Basketball Association (NBA), is expected to break with tradition and become the first league to adopt jersey sponsorships from 2017. This provides potential opportunities for automakers to sponsor teams that are as feverishly supported in cultural influencer cities such as New York and Los Angeles, as they are in key growth markets such as China and India. 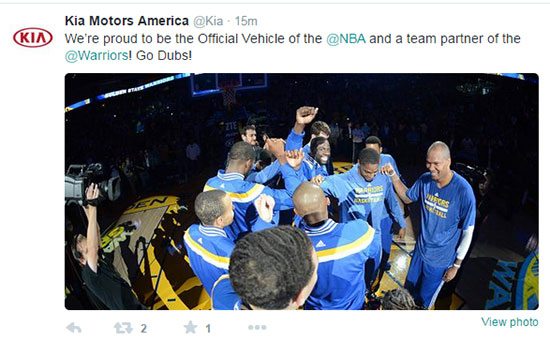 The rise of Facebook and Twitter gives automakers new channels to capitalise on sports sponsorships and connect with fans.