The way of the future?

Earlier this year, Google co-founder Sergey Brin revealed that the company has quietly designed and manufactured its own line of driverless vehicles. Still unnamed, the Google Car is equally impressive for features it doesn’t have: a steering wheel, a dashboard, and a brake pedal. Brin said that creating a car from scratch allowed Google to focus on building in safety measures, such as a foam bumper and a flexible, plastic windshield, and to install a 25 miles-per-hour speed limit for pedestrian safety.

Google began testing its self-driving car technology a few years with a fleet of Toyota Priuses and Lexus SUVs; equipping them with cameras, computers, radar, and laser range finders.

On-road testing is underway in Northern California and will continue through 2014. Unlike earlier testing which included a human safety tester to take over the vehicle via joystick in case of an emergency, the latest Google cars are truly driverless. Google has built in detection technology, allowing the car to detect objects in all directions up to 200 yards away. Once an object is detected, speeding and braking is adjusted accordingly.

With no driver, this next generation prototype has been designed primarily for knowledge-mining, not comfort. Google’s website explains the austere design: “two seats (with seatbelts), a space for passengers’ belongings, buttons to start and stop, and a screen that shows the route — and that’s about it.” 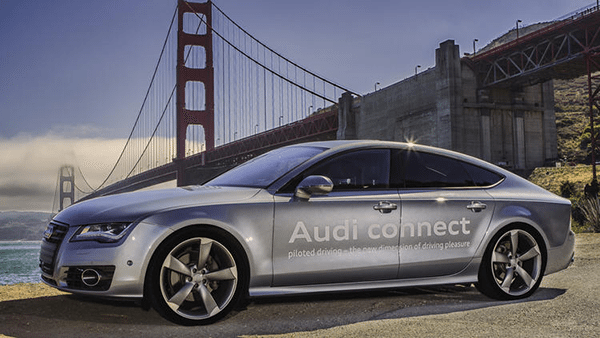 Google isn’t the only corporation banking on driverless cars. Just this month, Audi boasted it was the first automaker to secure an Autonomous Driving Permit by the state of California. Audi will not remain alone in the field for long. Other automakers have been researching self-driving technology, including: Ford, GM, Mercedes-Benz, Nissan, and Toyota.

Google is betting on a lucrative future by meeting demand for “robot cars” as urban sprawl continues. More population-dense living will make owning a car less important and allow cities to make better use of land currently devoted to parking lots and fleets of vehicles that sit idle for most of the day. “The project is about changing the world for people who are not well-served by transportation today,” Brin said.

The state of California has long been the touchstone of automotive efficiency advances, due to rigid CAFÉ standards and continuing urban population growth. “Autonomous vehicles are another example of how California’s technological leadership is turning today’s science fiction into tomorrow’s reality,” Governor Brown said. “This law will allow California’s pioneering engineers to safely test and implement this amazing new technology.”