The Birth of Toyota Motors 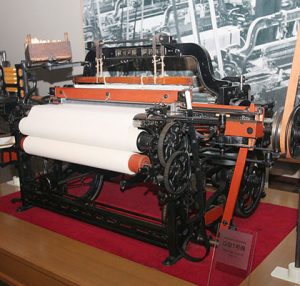 Cars weren’t the original product of Toyota. In 1924, Sakichi Toyoda, founder of Toyota Industries, invented the Toyoda Model G Automatic Loom. This Loom revolutionized the industry, resulting in a twenty-fold increase in productivity and unsurpassed quality.

Assembled via production lines, the looms were produced under the principle of Jidoka, which means the machine stops itself when a problem occurs. In 1929, the automatic loom patent was sold to a British company, generating the starting capital for automobile development. [Toyota.com/History of Toyota]

Considered a risky business venture, Sakichi’s eldest son, Kiichiro, led Toyota’s new automotive arm. Using the principles of Jidoka as his father did, Kiichiro expanded the theory to what today is known as just-in-time production. Stocking parts as needed pioneered assembly line production efficiencies and allowed quality to become the key focus of automotive assembly. His risky endeavor would pay off as Toyota would eventually become the world’s largest automobile manufacturer.
Toyota cars made their debut in the 1930s. The first passenger car, the Model AA was quickly followed by the Model AB Phaeton, both in 1936. Yet, it would be twenty years before Toyota would export a car to the U.S. In 1957, the Toyota Crown was sold in the automaker’s first U.S. dealership in Hollywood, California. A small car by the 1950’s standards, Toyota hoped to corner the small vehicle market segment. Sales were slow, with less than 300 sold the first year. The Crown, later dubbed the Toyopet, was not up to American standards of size, speed, and luxury. 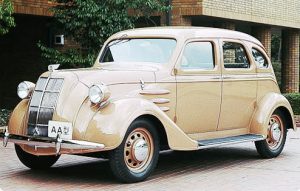 Using reasonable pricing as their key selling feature, the 1967 Corona sold for a reasonable $1,760 – less than the smallest Big Three sedans — and offered a good balance of performance, respectable gas mileage, and comfort. [toyoland.com]

Sales in the U.S. steadily grew, advancing Toyota as the #3 import brand sold stateside. By 1972, Toyota had sold its 1 millionth car worldwide, thanks in large part to growing U.S. sales. And by 1975, Toyota surpassed Volkwagen as the #1 import brand in America.

What began as a manufacturing company during the industrial revolution has now become the world’s top automotive corporation. Focusing on quality, efficiency, and understanding specific market requirements has made Toyota the number one automotive brand worldwide.

Image 1: Toyota’s start came from Sakichi Toyoda, owner of many patents, including the automatic loom.
Image 2: The year 1936 marked the birth of Toyota Motor’s first passenger car. It adopted the popular streamlined style, possessed an ideally balanced load on the front wheel, and offered a superior ride, which placed it above many foreign cars in terms of comfort. (Credit: google.com)
Image 3: After dismal U.S. sales of the 1957 Crown, Toyota introduced the Corona. Its improved styling, fuel efficiency and handling drove sales to 6,400, – 20 times more sales than its 1957 U.S. debut. (Credit: motortrend.com)