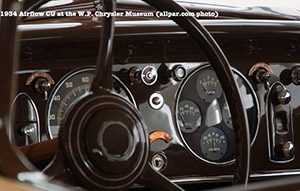 Even though considered as the “smallest of the Big Three,” Chrysler has many impressive firsts under its belt. In the 1930s alone, Chrysler patented 20+ parts and systems that have directly affected car design today.

Below are just a dozen of the many engineering innovations in which Chrysler was first to market:

The Airflow model was the first car to use scientific weight distribution and synchronized front and rear springs for an anti-pitch ride. The body provided most of the structural strength. Amola steel was used. [www.allpar.com]

However, these advancements were tempered by the vehicle’s rushed assembly process. Mere months after design was complete, the Airflow was put into production. Due to its unique design and numerous of new components, assembly was rushed, expensive, and poorly executed. According to Fred Breer, son of Chrysler Engineer Carl Breer, the first 2,000 to 3,000 Airflows to leave the factory had major defects, including engines breaking loose from their mountings at 80 mph (130 km/h).[Wikipedia]

Although the Chrysler Airflow will not be remembered for its staying power, it inspired many automotive pioneers. Its revolutionary body lines based – on the principles of air movement – was not lost on future vehicle design. The 1936 Toyota AA, 1935 Volvo Carioca, and reportedly the new Volkswagen Beetle, designed in 1938 by Ferdinand Porsche (yes, that Porsche) were all influenced by the Chrysler Airflow.