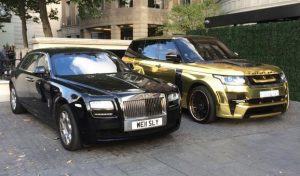 Challenging even Mr. T in the gaudy department, Londoners were recently lucky enough to see a one-of-a-kind Land Rover – a gold-plated one. Reportedly owned by a Saudi, the “Mystere” was flown over to accompany its owner on vacation in Knightsbridge, a wealthy suburb of London. It is a popular escape for the Middle Eastern rich who seek relief from the oppressive summers.

However, such customization does not come cheap. A top of the line Range Rover Evoque will set you back $167,200 USD. To transform it to the “Mystere” edition, like the trinket above, costs an additional $83,000 USD. This upgrade includes a customized body kit with oversized bumpers, a hood vent, 23-inch alloy wheels, and carbon fiber hood scoop and trim with illuminated Mystere grille badge. The regular body color for the Mystere is a matte grey. It is unknown what the gold wrapped upgrade cost its owner.

Tweets abounded in Knightsbridge regarding the Gold Land Rover. The Rodeo Drive of London, Knightsbridge is no stranger to wealth. Home to exclusive (read: expensive) designer shops such as Manolo Blahnik, Harrod’s, and Jimmy Choo, Knightsbridge is one of the most expensive cities to live in. Even so, one Tweeter acknowledged: “It is not often that a Rolls-Royce looks like the understated car,” and another praising: “Solid gold Range Rover? Well played, London.”
Gold’s not your color and you got money to burn? Don’t worry; a hot pink metallic wrapped Mystere has also been spotted. Showcased at the 2013 Geneva Auto Show, it has not yet been spotted in public; let’s hope it never is.

Image 1: Upstaging even a Rolls Royce, this customized Land Rover “Mystere” had heads turning and Tweeters tweeting earlier this month in Knightsbridge, U.K. (Credit Macie Bliss)
Image 2: Not to be outdone by its gold-wrapped counterpart, the pink metallic “Mystere” made its debut at last year’s Geneva Auto Show. (Credit: brookwell.co.uk)