The Imperial Crown – Stop Calling it a Chrysler

The Imperial dates back to the 1920s and marks Chrysler’s sustained effort to compete in the luxury market. In 1957, Chrysler got serious about designing a luxury model and registered the Imperial as a separate platform. This was done in part to rival Ford and GM’s luxury brands Lincoln and Cadillac. The intent was that the name Imperial would equate luxury, extravagance and exclusivity. This was not a Chrysler; it was an Imperial. 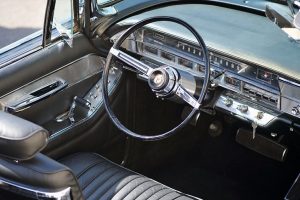 With a distinct body design and innovative features, the Imperial Crown included a two-door Newport hardtop coupe and a four-door sedan. The V8 engine was Chrysler’s first-generation Hemi V8.

According to Wikipedia, the Imperial Crown boasted the most front seat shoulder room and would remain the record holder for any car until the 1971–1976 GM full-size models.

Even the vehicle’s exterior width reached a maximum of 81.7 in (2,075 mm) during 1961–1963, which remains the record for the widest non-limousine American car. After Lincoln downsized in 1961, Imperial had no real competitor for the title of largest car through the remainder of its decade-long lifespan.

Although short lived, the Imperial did introduce several technological innovations including:

1953 – Air conditioning was offered as an option at $535, equating a staggering $3,600 in 2014 dollars.
1957 – Power seats and dual exhaust were made standard across the line. Also in 1957, a convertible was available for the first time on an Imperial.
1958 – Auto-Pilot cruise control introduced- which used a rotary controller on the dashboard to dial in the desired speed.
1959 – optional swiveling front seats pivoted outward to ease entry.
1964 – promising a “a more theatrical sound experience,” Imperial offered a reverberator for the rear speaker – literally a spring that delayed the response of the speaker for a simulated music-hall effect.
1966 – optional telescoping steering wheel and a “fully transistorized Search-Tune AM/FM radio with foot-operated selector switch” (because who doesn’t like to adjust the radio with their feet?)
1967 – front passenger seat that rotated 180 degrees to access a folding walnut conference table, Swivel ‘n Go-style.

In other firsts, Imperials were credited with the earliest use of four-wheel disc brakes (1950) as well as the first-ever four-wheel antilock brake system (1971). 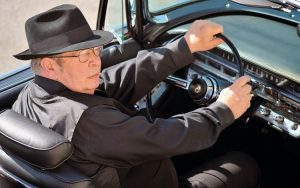 The Imperial got its most recent plug on the History Channel’s popular TV show, Pawn Stars. One episode was dedicated to Richard “The Old Man” Harrison’s junked Imperial collecting dust in the family’s Las Vegas pawn shop for 15 years. After teasing The Old Man that they had sold it for $1,000, to a guy who wanted to convert it to a low-rider, his son, Rick, revealed a restored ’66 Imperial Convertible as a surprise for his dad. Not enjoying the prank at his expense, “The Old Man quipped: “”There was only 514 of those made; you don’t turn that car into a low-rider.” The Old Man was right; only 514 1966 Imperial Crown Convertibles were produced. And, of that, those remaining number less than 100.

Whether it was inadequate branding (Imperial could never shake the “Chrysler” prefix) quality issues (of which there were many), the Imperial never reached the market share of rivals Lincoln and Cadillac. Yes its unique, “forward look” styling and futuristic driver features make it a popular collectible today.

But if you happen to see a ’66 black Imperial convertible cruising through the deserts of Las Vegas, consider yourself lucky. There are less than 100 on the road today, and The Old Man proudly owns one of them.

image 1: In an attempt to compete the luxury brands Lincoln and Cadillac, Chrysler designed the Imperial as its own entity. Equipped with innovative features such as telescoping steering wheel, V-8 Hemi, and swivel seats, it never owned the luxury market, but still has thousands of fans today. (Credit: www.businessinsider.com)
image 2: Richard “The Old Man” Harrison of the History Channel’s Pawn Stars in his restored 1966 Imperial Convertible. (Credit: www.google.com)