The Origins of Microcat

In 1987 a young parts interpreter stood in front of his microfiche reader and thought, there must be a better way to find parts. By day, Wayne Sinclair sold parts for a prominent dealership in Sydney. By night he taught himself programming at his kitchen table.

Wayne observed that no matter how experienced the interpreters in the shop were, they all made some mistakes interpreting the symbols, abbreviations, and codes of the microfiche. Part of his job was to process the parts that had to be returned to the automaker because they were incorrectly selected. That could be 4% to 8% of the parts ordered. He also saw unintentional mispricing occur, as busy parts interpreters misread part numbers from the catalog or mistyped them into the DMS.

Wayne had the idea that it would be possible to program a personal computer, to apply the rules that he had been taught, to interpret the symbols, abbreviations, and codes of the microfiche. Then it would automatically cross-check for supercession, look up the price, and build an order in the DMS. So during the following three years, he was parts man by day and programmer by night. Throughout that time, Wayne showed his prototype electronic parts catalog to every parts interpreter and manager who was interested. He took onboard their feedback and suggestions and programmed them in. His “MicroCat” was truly an EPC created by parts people for parts people.

In 1990, Wayne teamed up with Infomedia to move Microcat® from his kitchen table to the world. The company assembled a team of programmers, data managers and commercial people to build on his work and make it so reliable that it could be depended upon every day by dealerships around the world. It was widely applauded for its advanced concepts that defined EPC not just as a catalog part display, but as an ‘intelligent’ parts selling system.

In the years that followed, Microcat continued to set the agenda for EPC features and functions. It introduced a string of firsts, including being the first EPC to: integrate VIN data to uniquely identify a vehicle for interpretation; use a single user interface regardless of OE franchise; directly transfer parts into a DMS for order entry; include interpretation for local and regional parts; use color and sound to improve user performance; operate in multiple languages and multiple currencies: use DVD-ROM for simpler distribution and installation; and provide integrated service menu operations, just to name a few. 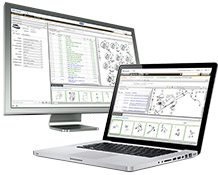 Since Microcat was released in 1990 to its first user, it has gone on to be the leading EPC platform in the world. It is published monthly in 31 languages, shipped to 186 countries and used by more than 150,000 parts people every day. Throughout this time, Microcat has continued to be developed and manufactured by one company – Infomedia. Our continuous innovation, technology know-how and customer service under the same roof and same management, pays dividends for our customers every day.

Now as we move from DVD to online operation, Infomedia is applying its rich developmental knowledge to create an even more versatile and powerful tool for parts professionals. As the all new Microcat LIVE™ introduces dealerships to the freedom of needing no discs, no dongles, and no delays for OEM data updates, it remains an EPC created by parts people for parts people.