A Mustang by Any Other Name…

If you loved the sleek lines, power, and the overall appearance of a certain car model, would its model name change your mind? Would a Mustang still have the same appeal if it were called a Nag? How about if the car were redesigned, yet still bore the name Mustang? Could you forgive its many flaws based on its heritage? 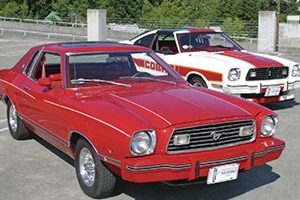 Model-naming has always intrigued car buffs. Why name a car after an antelope that gallops across the African sahara? Or after a medieval courtesan? Is that what car makers think owners want to drive, or to become? Do they?

Car makers think so, and have spent millions, if not billions of dollars studying, researching, and testing the sound and mood evoked by certain words. Naming a baby has never been as complicated as the hours of psychology, market, and word connotation research gone into christening a hunk of metal, plastic, and glass.

During the Golden Age of U.S. car manufacturing, the 1950s produced powerful, high class model names: Thunderbird, Bel Air, Chieftan, New Yorker. Owners couldn’t help but feel a bit better about themselves behind the wheels of these high society namesakes.

By the 1960s, two-car families became more prominent and model names reflected more family-friendly times. Sure, there were still sports cars, but more often, it was more common to see a housewife going to the grocery store in a Country Squire wagon, complete with kids in the rear facing seat (not belted in, of course) or see her husband heading to the office in a Bonneville, looking more like the captain of a massive cruise ship. 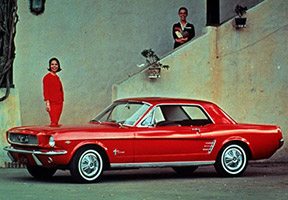 The 1970s was the decade of equality. No more boring, sensible wheels for mom. Her groceries would fit just as well in a Camaro or Corvette; and the kids? They could stay at home. Gas was cheap, as were buying and maintaining cars (relatively speaking), and driving a Barracuda reeked of speed, power, and a even little danger. A model named after a poisonous ocean tyrant would not have garnered so much appeal in the ‘50s, but the ‘70s car buyers devoured it.

But by the middle of the decade, things began to change. Gas prices escalated, insurance prices followed suit, and car makers were forced to re-calibrate, remodel, or get out of the game. Reliability, affordability, and fuel efficient became the industry buzz words, and model names reflected that. Driving a Horizon, Fairmont, or Cruiser sent the message that you were economical, responsible, and willing to put up with heinous diesel fumes, all in the name of value. Even the regal Mustang was gelded in the mid-70s, with a horrific model makeover transforming the football star to the science nerd. Even though the downgrade was temporary, it took years for the word Mustang to equal the speed, agility, and respect of its forefather.

Next month, we will move into the 1980s: big business, big hair, and minivans.